Being a teenager is hard, and nobody wants to talk about it. Confronting the daily challenges of growing up, this series of monologues and scenes offers a look at a multitude of issues -- including dealing with parents who just don't get it, rumors, bullying, and suicide. By turns funny and tragic, the gritty details of adolescence surface -- exposing the things teenagers can't, won't, and don't want to talk about.

I Don't Wanna Talk About It

Continue to check back for future events.

An Evening of storytelling from around the world, including puppetry, dancing, and music.

Many Cultures, One Commuity

Many Cultures, One Community is a free performance. I Don’t Want to Talk About It is $5.00 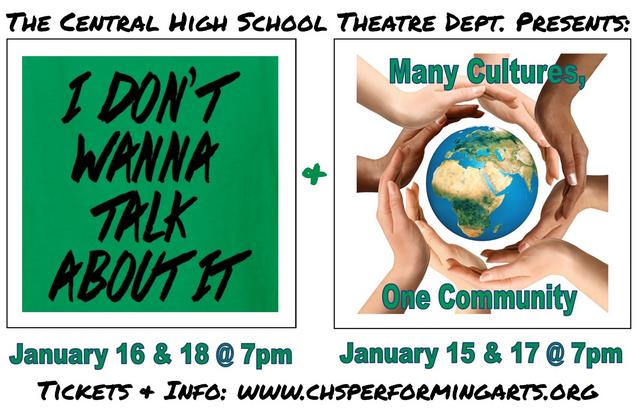 Purchase tickets online in advance to reserve your seat for shows performed in the Central High School theater!  Online ticket sales end three hours before each show begins.  Tickets may also be purchased at the box office for general seating starting approx. 45 minutes before show time.  Ticket prices differ depending on the event. Tickets may be purchased using cash, check, or credit card.